Iceland, the Land of Fire and Ice… and Orcas!

Iceland, located in the North Atlantic Ocean, is also known as the land of fire and ice. The island offers many beautiful sights, such as waterfalls and volcanic landscapes, but is also a very good location for seeing cetaceans. One of the species that you can encounter here is the orca.

Beautiful weather with lots of sun and about 25°C/77°F; that was the weather forecasts for the Easter weekend in the Netherlands in April. Yet, I decided not to stay at home, but to book a last minute trip to Iceland, where sun, clouds and rain would alternate at around 10°C/50°F. As long as it would not be too windy to go out to sea, the weather forecast was not that important. I went on this trip hoping to see the Icelandic orcas! 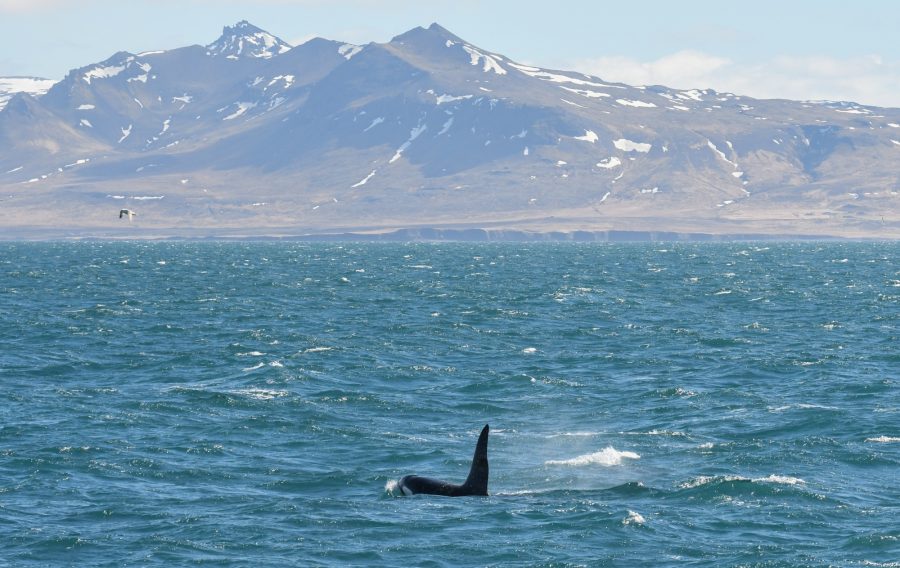 Orca with the mountains of the Snæfellsnes Peninsula in the background. 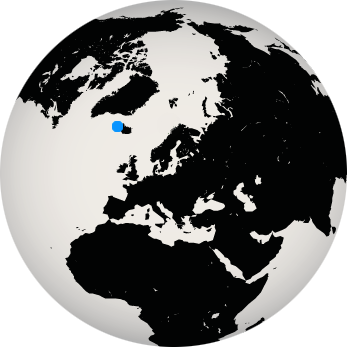 Orcas in Iceland
Orcas can sporadically be seen around all of Iceland’s coastlines. However, there are two locations where the chance of encountering them is greater. The first location is the island group Vestmannæyjar, also known as the Westman Islands, off the south coast of Iceland. The orcas come here to hunt herring during the summer months. In July 2013, I visited Iceland for the first time and spent a month on Heimaey, the largest island of this special archipelago. At that time, I was completing a Master’s degree in biology and was able to do an internship with the Icelandic Orca Project. After this trip, I intended to go back someday. In April 2019, this brought me to the other location where there is a good chance of encountering orcas; the Snæfellsnes Peninsula on the west side of Iceland.

In 2010, orcas were present in larger numbers than before around Snæfellsnes. Many orca pods were found in the fjord near the town of Grundarfjörður, where they fed on the herring during the winter. A few years later, the herring moved to the neighboring fjord, Kolgrafarfjördur. The orcas followed. To get to this fjord, the orcas swam under a bridge, creating spectacular moments for spectators standing on this bridge. Although the orcas no longer enter these smaller fjords, they are still present along the shoreline of the peninsula and there is a good chance to see them during a trip at sea. 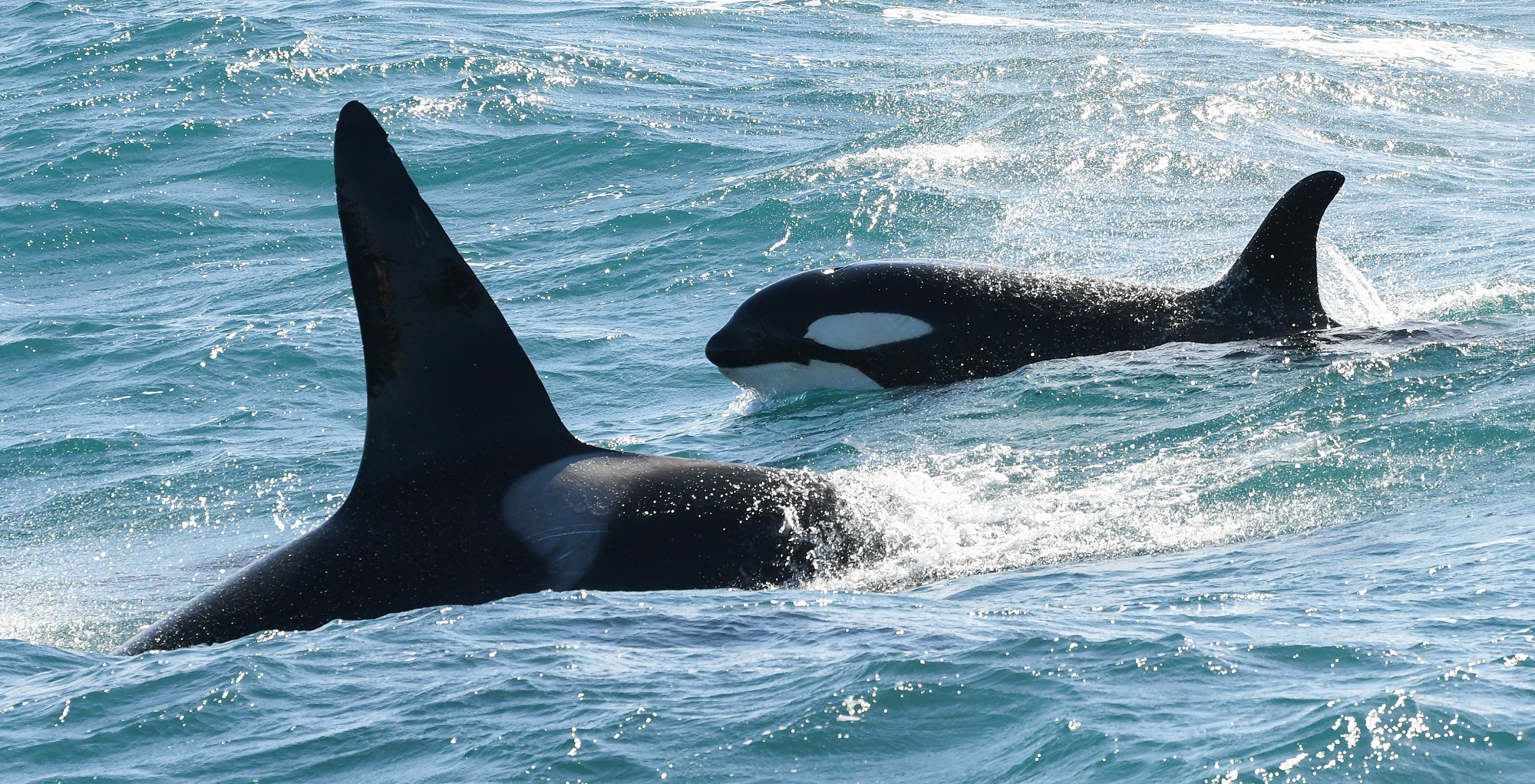 Láki Tours is a whale watch organization based in Grundarfjörður. It is the only company that offers whale watching tours in this location. From December to March, they depart from the harbor of Grundarfjörður and from April to October from the town of Ólafsvík. They sail into Breiðafjörður, a fjord of about 125 kilometers long and 50 kilometers wide. The presence of orcas varies per season in this area. March to June seems to be the best time to see orcas, but there is certainly a chance to see them outside this period as well. In addition to killer whales, other species that are regularly seen include sperm whales, humpback whales, white-beaked dolphins, and pilot whales.

“March to June seems to be the best time to see orcas, but there is certainly a chance to see them outside this period as well.” 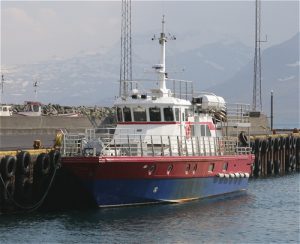 The boat of Láki Tours.

The Journey Begins
We arrived at the end of the afternoon on a Saturday at the airport of Keflavík. From here it took about three hours to drive to Grundarfjörður, where we stayed the first few nights of the trip in the B&B that is also owned by Láki Tours. The first trip was planned for the following afternoon. We arrived in the harbor of Ólafsvík half an hour before departure. After everyone was dressed in a warm suit, we boarded the boat called ‘Iris’. The vessel offers space for around 60 passengers and passengers can choose to be inside or outside. After a bit of sailing into the Breiðafjörður the news we were hoping for came over the speaker: orcas were seen by the spotter!

Marie, the spotter and guide, was standing on top of the whale watching boat. Once the orcas were seen, skipper Gisli ensured that the animals were approached slowly. Marie then takes identification photos of the orcas. In addition to working at Láki Tours, she is also the founder of Orca Guardians Iceland. Through research and education, this non-profit organization is committed to protecting orcas and their habitat in Iceland. An important part of the research is based on recognition of individual orcas using photos. In 2017, a photo-identification catalog was published and featured photos of all the orcas that were seen off western Iceland between 2014 and 2017. Orca Guardians Iceland also contributes to a number of publications, including those on the prey of Icelandic orcas.

Orca and white beaked dolphins surfing in the waves.

Foraging Together
The next day, we found orcas again after watching some white-beaked dolphins and a humpback whale. After observing them for some time, the orcas were accompanied by active white-beaked dolphins and diving gannets. A few times we saw an orca accompanied by white-beaked dolphins surfing in the high waves, a special sight! This multi-species gathering probably had to do with food. The orcas had possibly driven a school of herring together, from which the dolphins and birds benefited. Orcas in Norway and Iceland use a special method to hunt herring, called ‘carousel feeding’. The orcas herd the herring by circling around the school with their white bellies. As a result, the herring will start to swim in a compact ball. The orcas then hit the herring with their flukes. This impact will stun the fish and the orcas can eat them one by one.

A Familiar Fin
Some of the orcas we saw on the second trip were the same animals that we saw on the first trip. During these observations, I noticed one individual that seemed very familiar. White scars were visible on the left side of his saddle patch. I had seen this orca before! Once back at the hotel, I placed my photo next to the Icelandic Orca Project catalog. It was indeed the orca that I had in mind, also known as IS065. I saw this orca in Vestmannæyjar in 2013 when he was a bit smaller. I also saw other matches with animals that I had seen before, from IS065’s family. It was great to see these orcas again, and especially at a location that is (by the shortest route) almost 300 kilometers away.

On the third day, the trip was canceled due to strong winds. It is not unusual here that trips have to be canceled due to the weather conditions. It is therefore recommended to visit for several days to increase the chance of seeing orcas. Additionally, orcas are not seen on every trip, as it turned out during my third trip. However, we found several sperm whales during this tour. The sperm whales could be seen breathing a number of times on the surface, after which they showed their flukes beautifully above water during their dives. 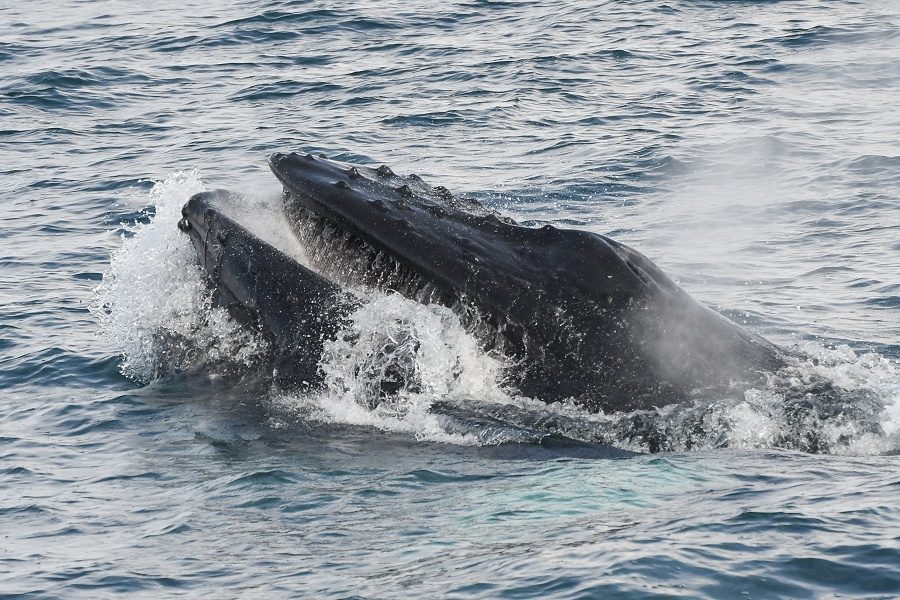 The fourth trip also started with a sperm whale, but soon several orcas were seen in the same area. The orcas swam spread out in small groups or pairs. While we were following the orcas, a sperm whale occasionally surfaced. We briefly caught a glimpse until it dove into the deep again and then we went back to the orcas. On the last trip we were also lucky to encounter orcas. This day we only saw a few individuals who were swimming calmly. It was mainly the humpbacks that were the highlight of this trip. Two animals were foraging, taking large gulps of food at the surface; a spectacular sight! 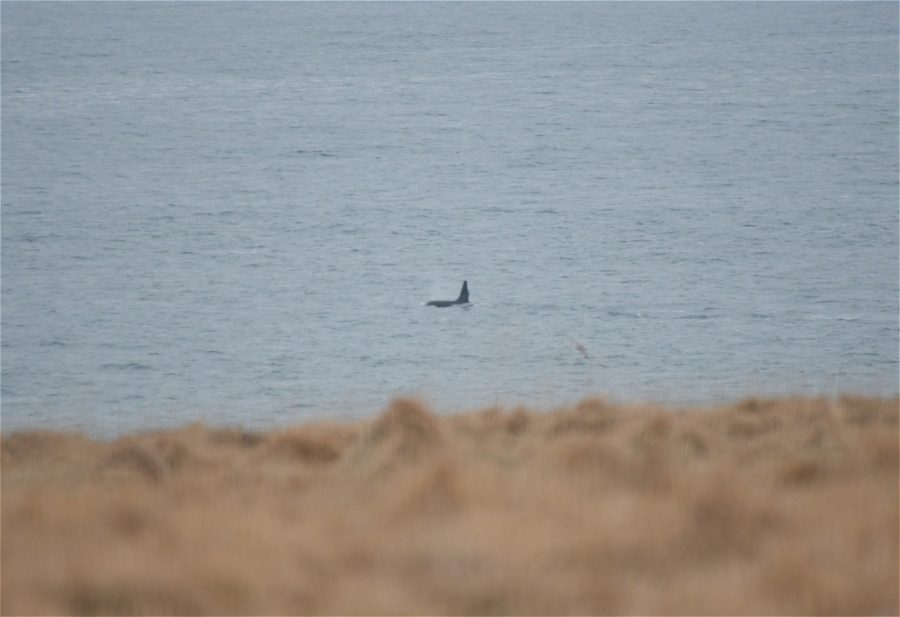 Orca, photographed from the hotel room.

Unexpected Surprise
My most unexpected orca observation this holiday was not from a boat. It was on an evening, after a day with Láki Tours at sea. I was back in the room of our hotel in the town of Arnarstapi, where we stayed the second half of our holiday. As I looked out of the window, I suddenly thought I saw something in the distance that looked like a dorsal fin. I did not have binoculars, but luckily, I had my camera with telephoto lens within reach. And yes, I was right, a pod of orcas was swimming along the coast! I quickly went outside, where I saw the orcas one more time in the distance before they disappeared towards the horizon. This room with ocean view was worth the money.

Although the orcas and the other cetaceans were the highlight of this trip, the Snæfellsnes Peninsula has more to offer. You can enjoy mountains, waterfalls and cliffs, along with many other things, making this location definitely worth it to visit!

Special thanks to Láki Tours

Learn more about Icelandic orcas? Check out the websites below!