Exhibition in the picture: THE WHALE HALL OF ECOMARE 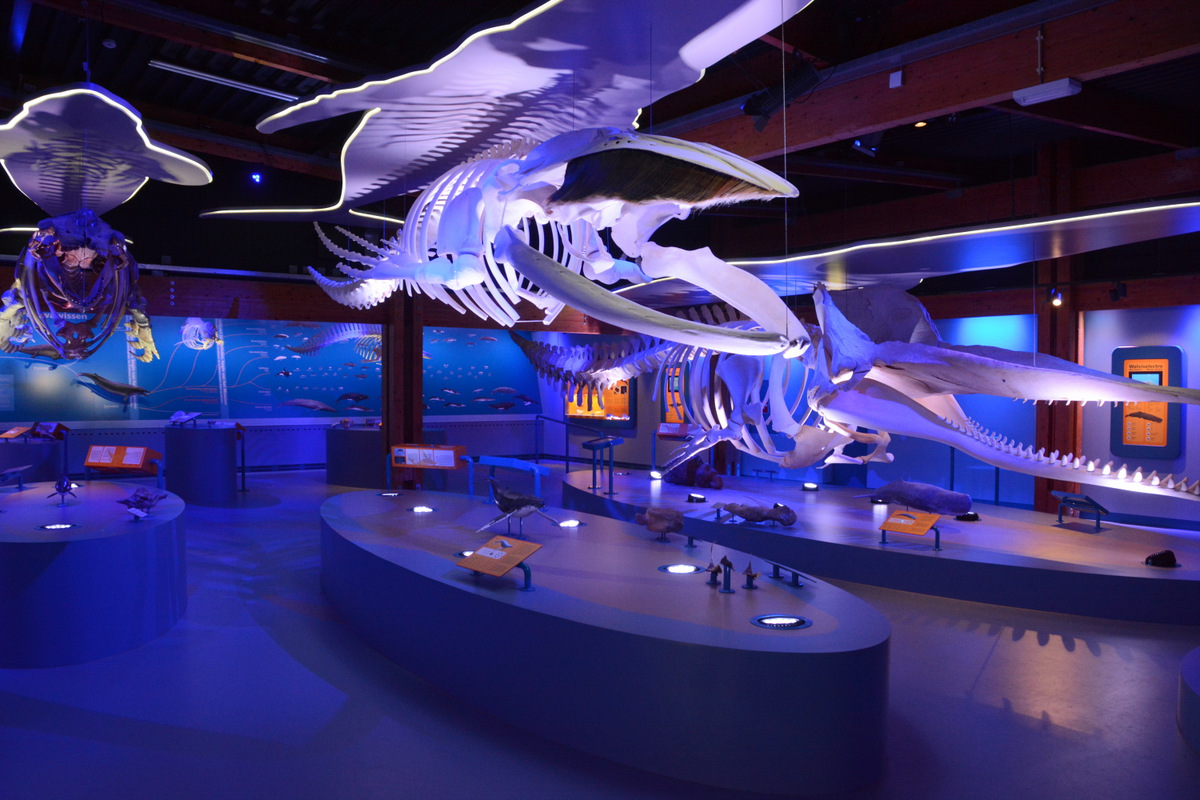 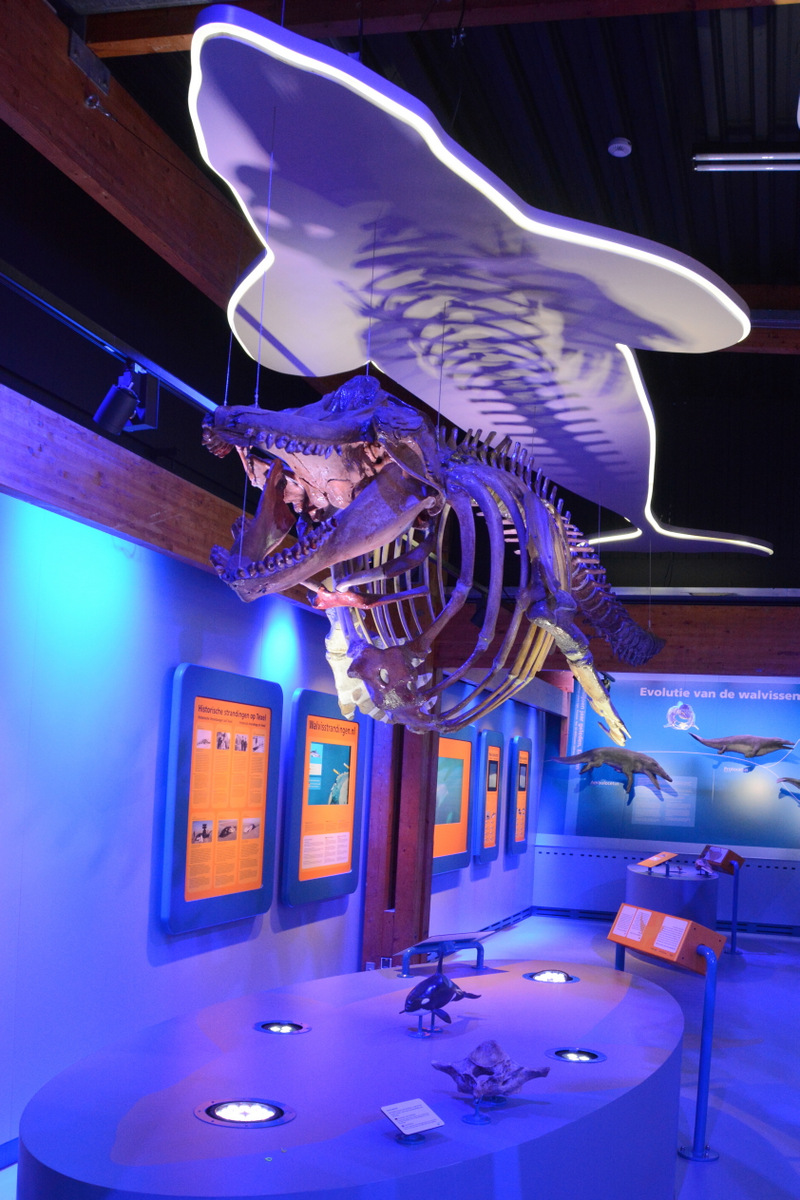 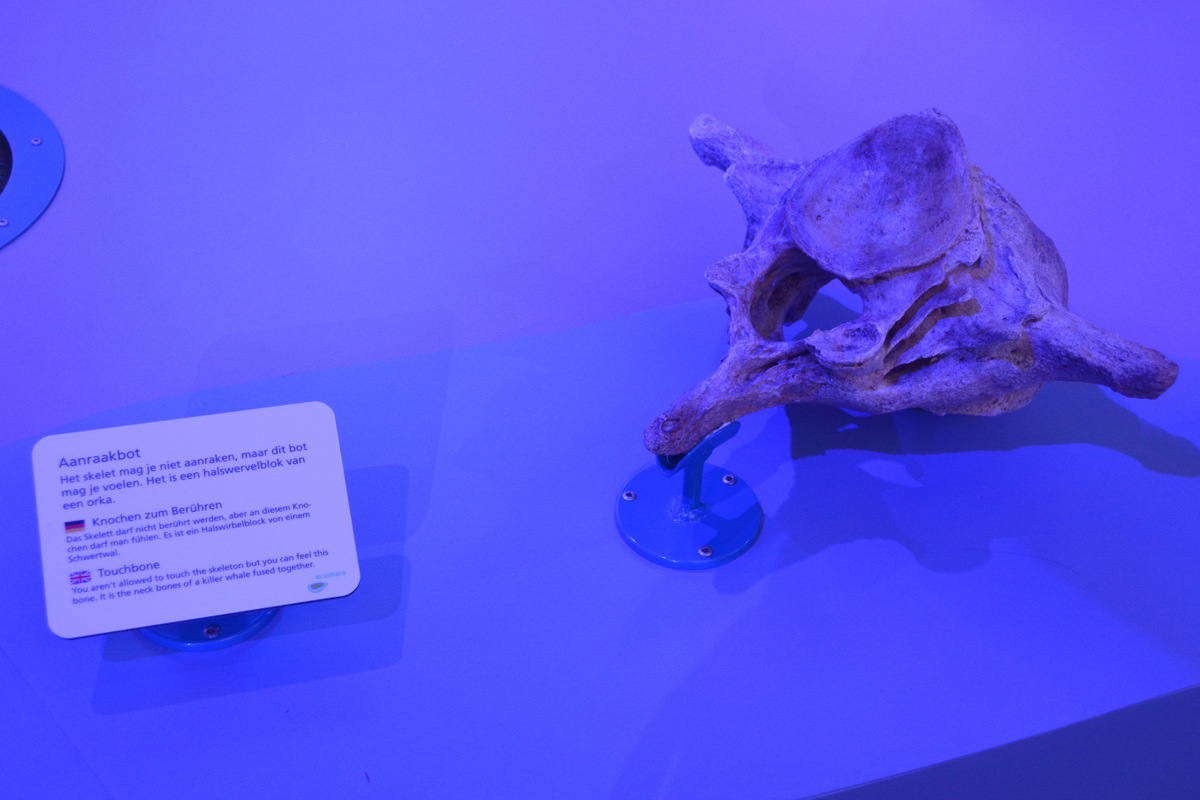 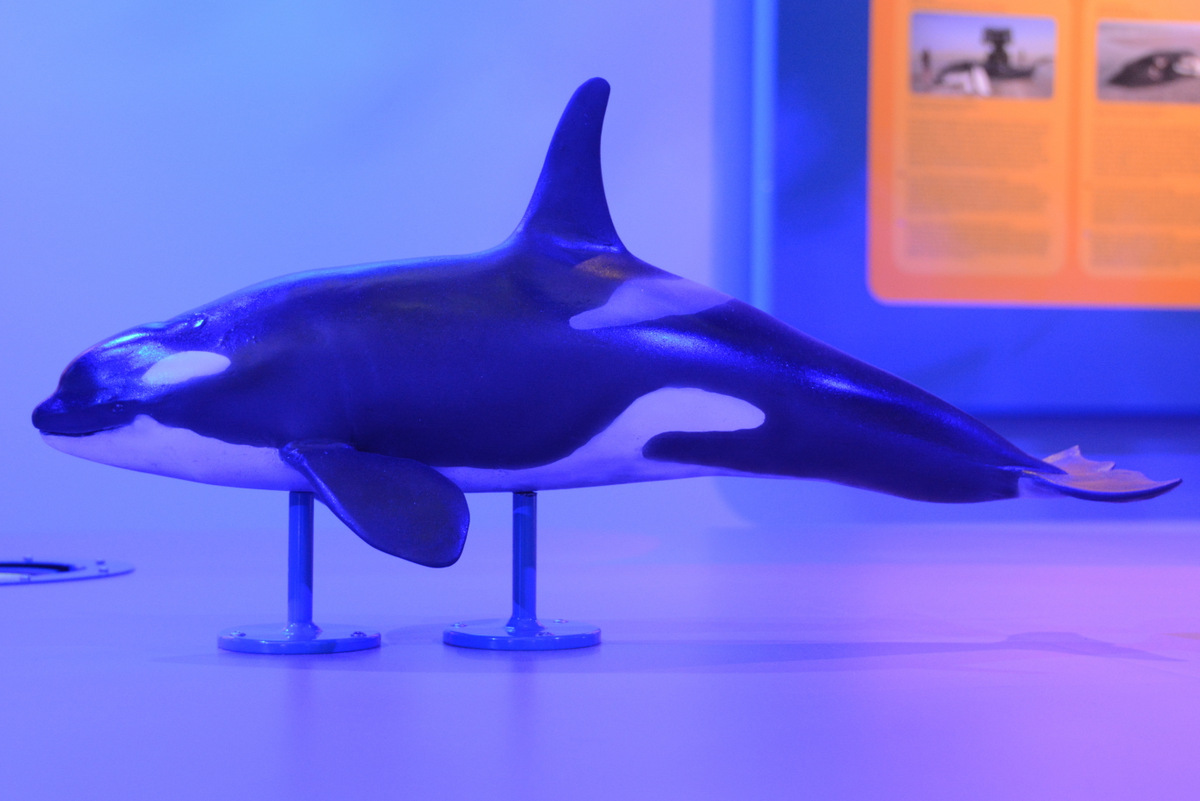 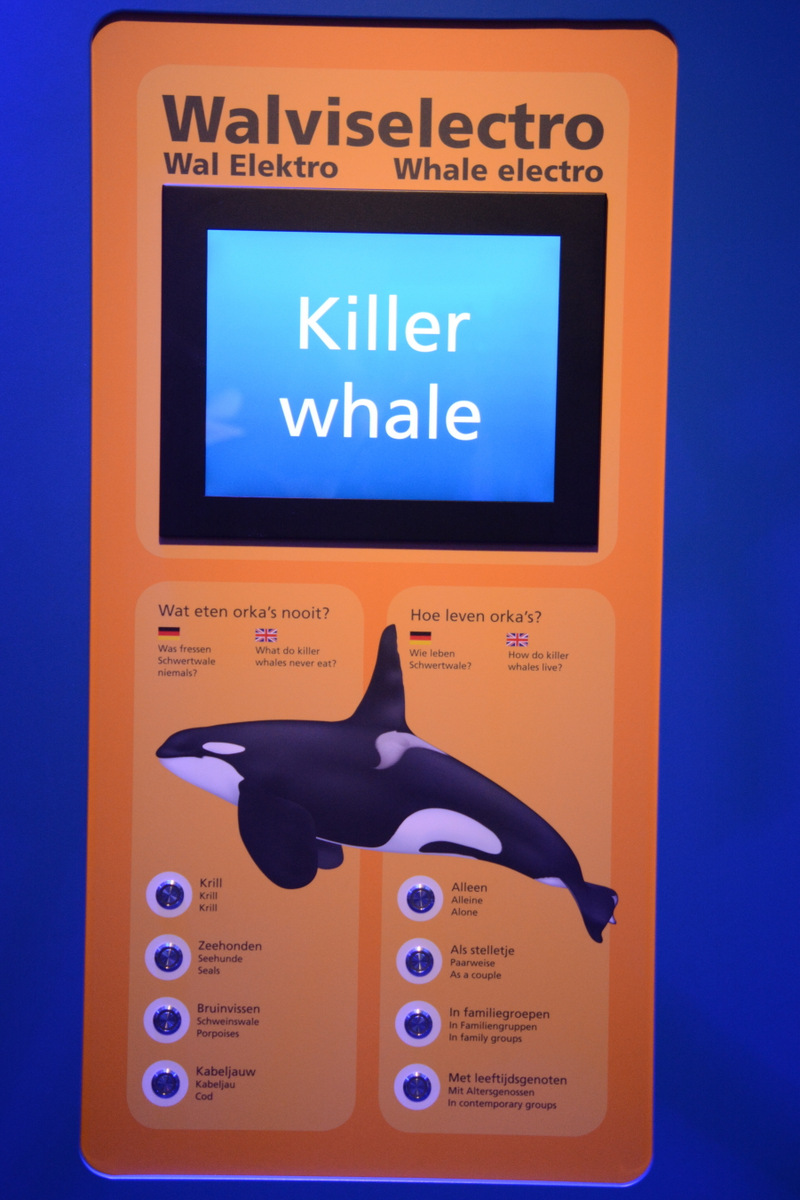 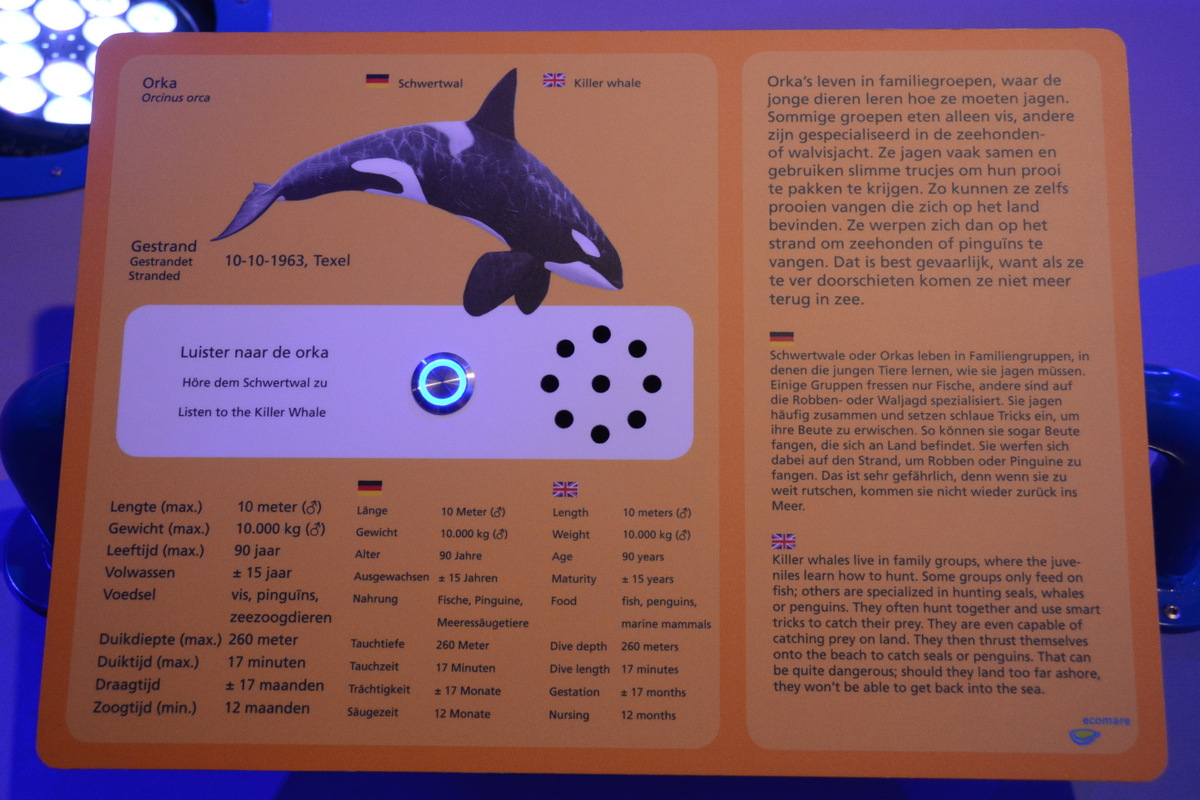 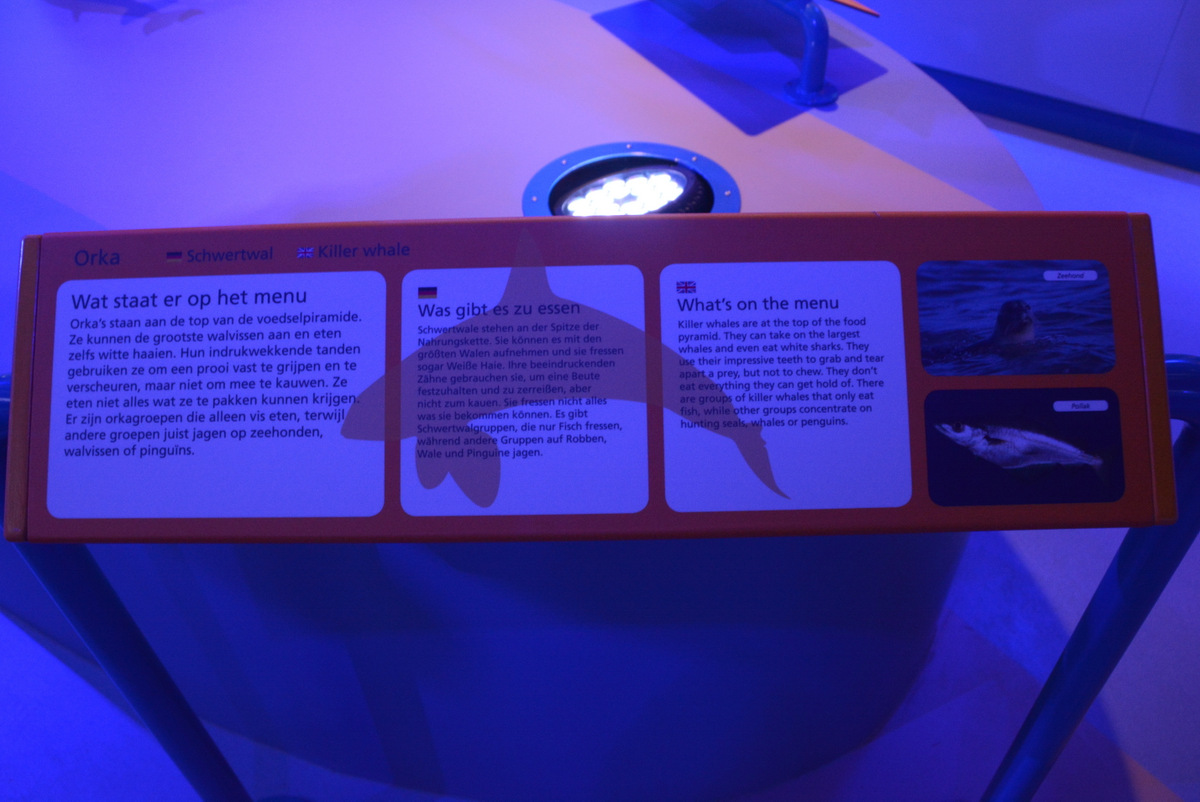 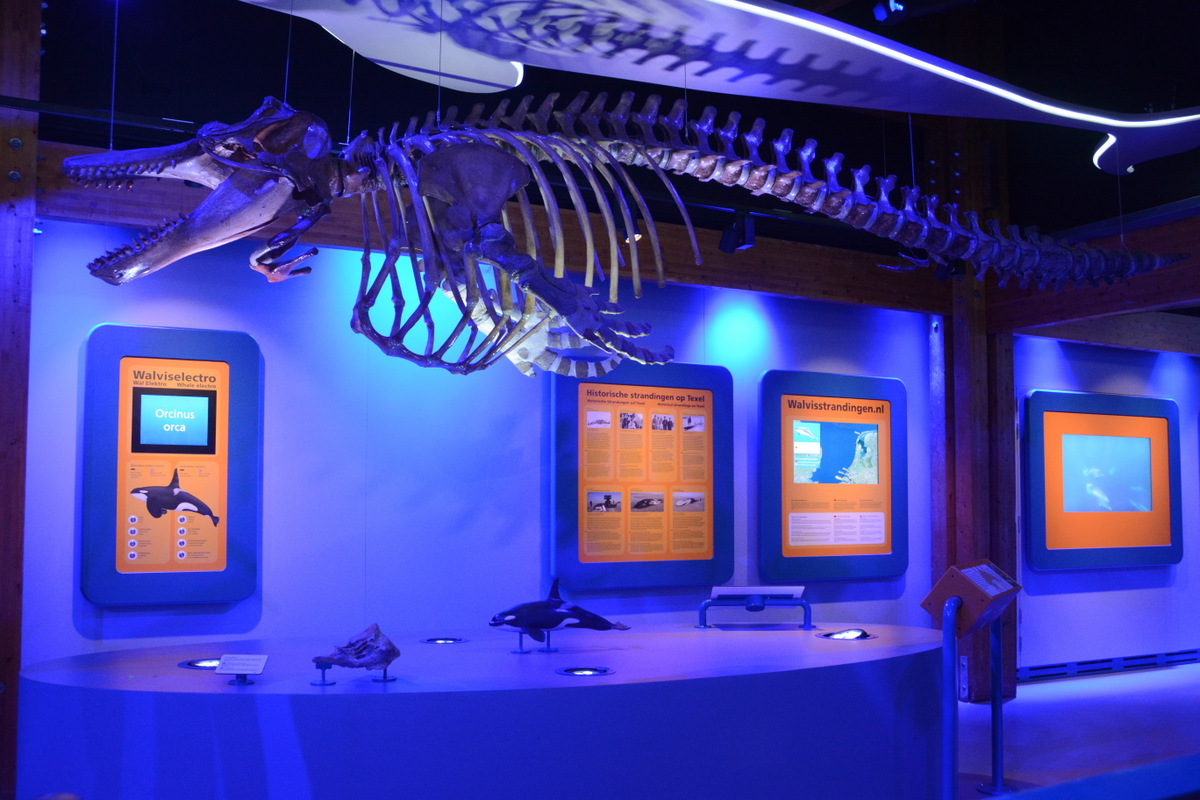 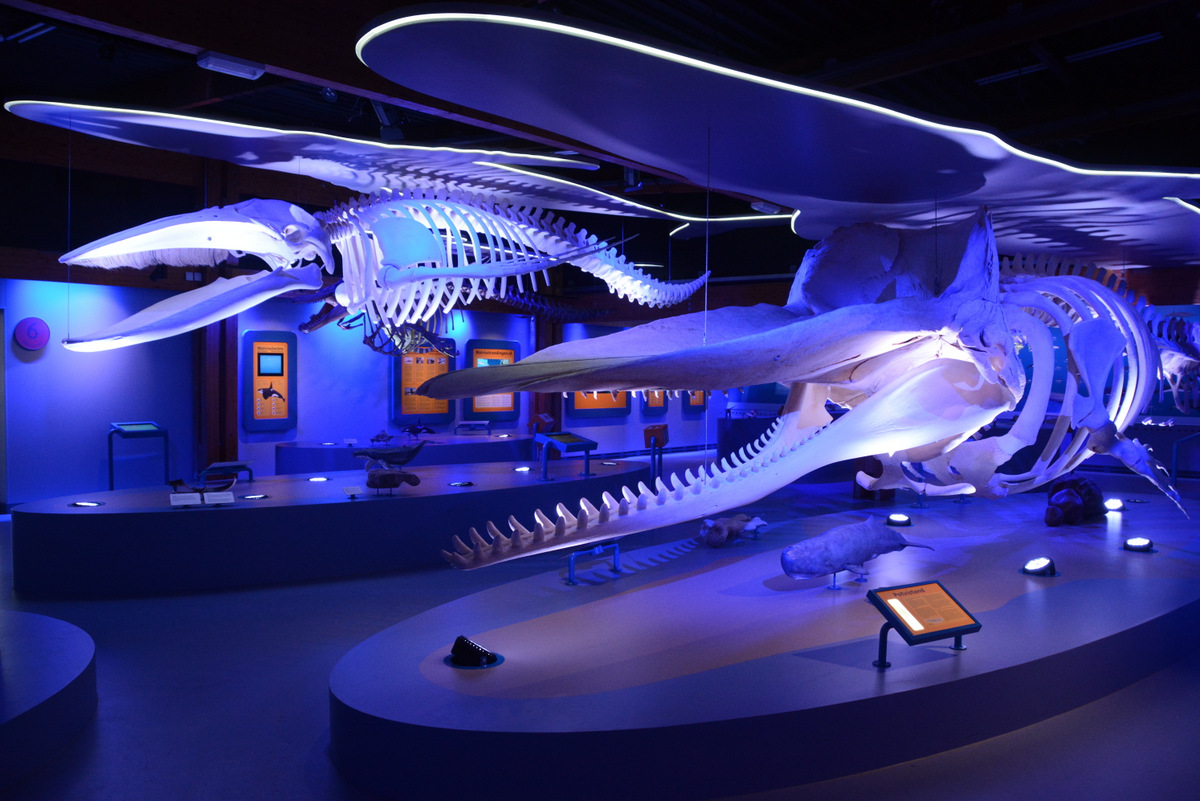 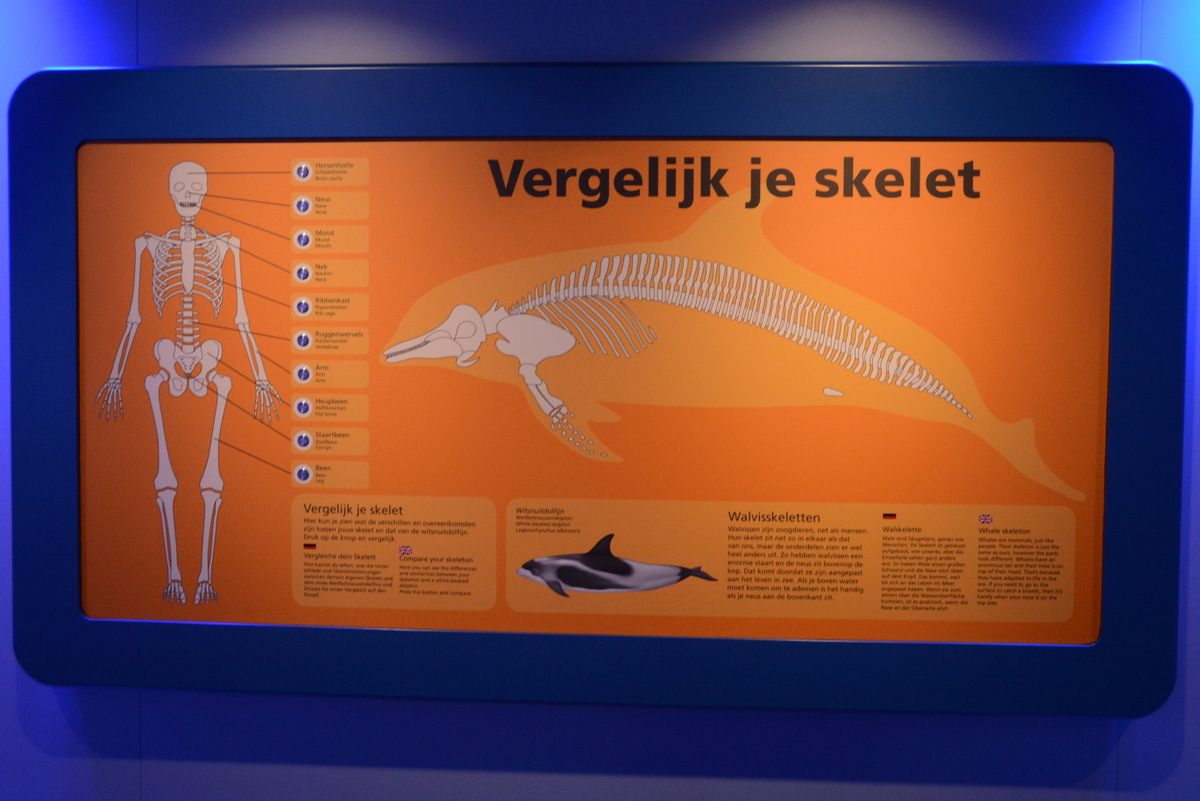 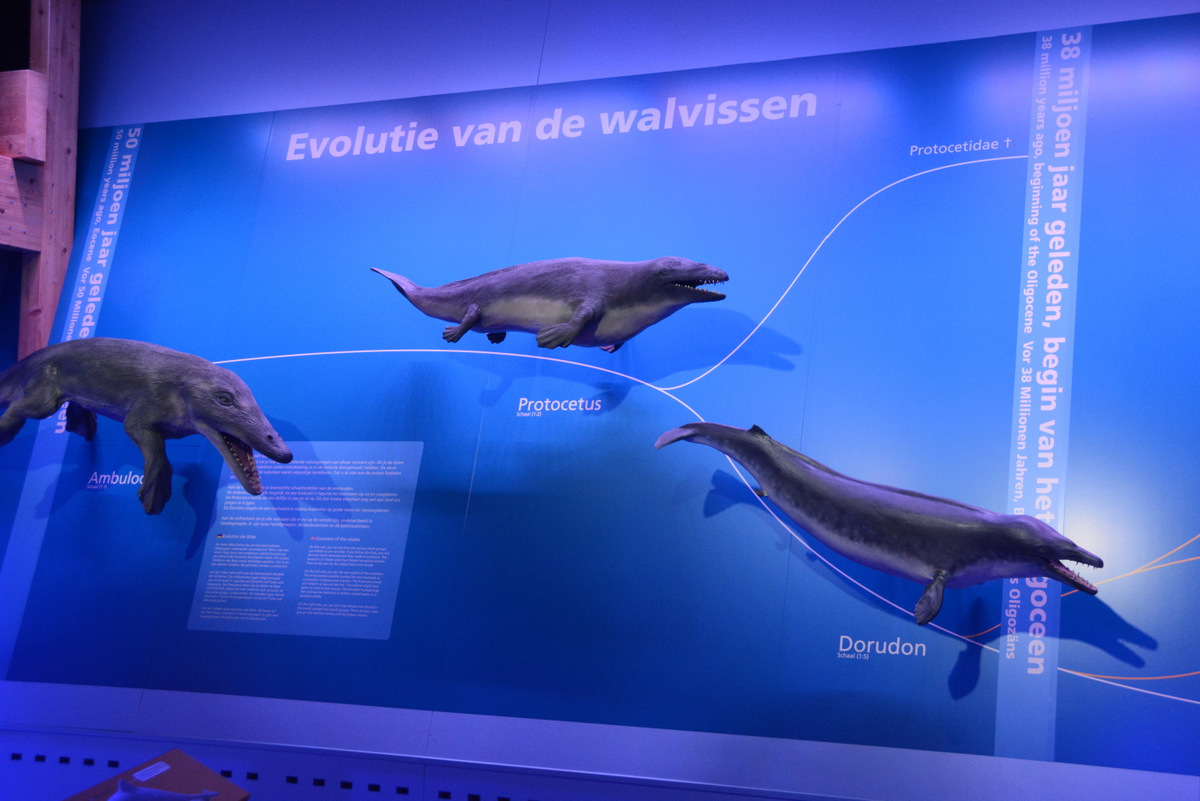 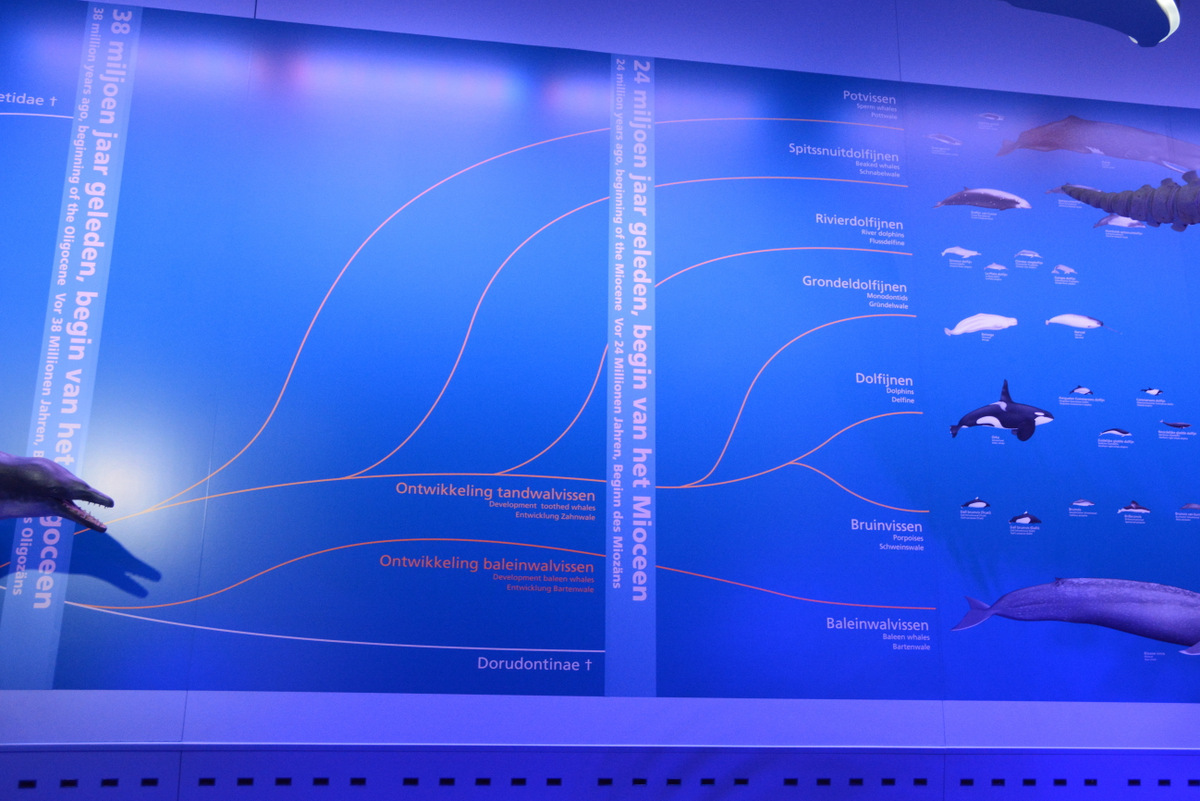 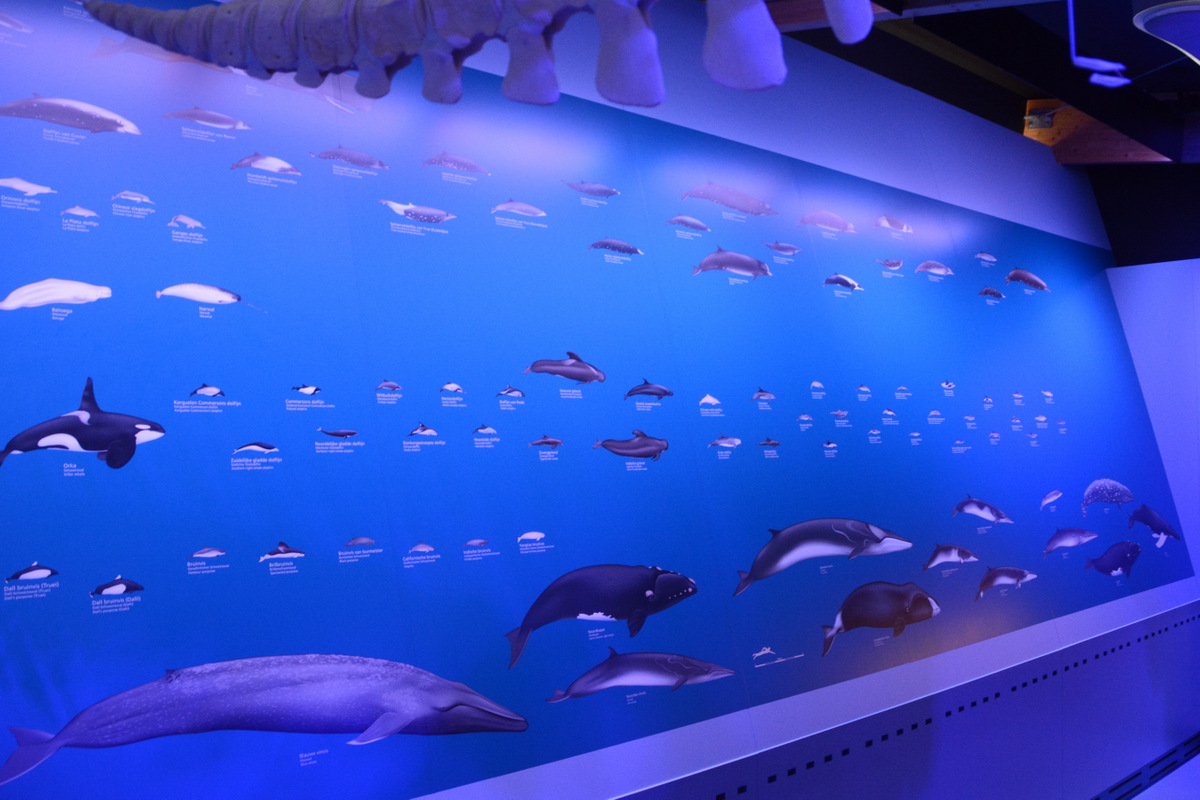 The nature center Ecomare can be found on the Wadden Island Texel in the Netherlands. In April 2014, Ecomare opened the whale hall. Visitors of the center can learn many things about these animals in this hall.

Ecomare started in 1952 as a seal rehabilitation center. Nowadays, there are still seals rehabilitated at the center which are released back to the wild when they are healthy again. Additionally, there is a rescue area for sick and weakened birds. There are also some resident animals, like harbor seals, grey seals, harbor porpoises and various smaller animals in the aquaria. Next to the area with the live animals, there is a nature museum that among other things includes the whale hall.

Ecomare opened the whale hall in April 2014. This educational area was financed in a special way. A dead sperm whale stranded on a sand bank near Texel at the end of 2012. Ecomare took the responsibility to dissect the sperm whale and did a remarkable discovery. 83 kg of ambergris was found in the intestines of the whale. This is a special substance that can only be found inside the body of sperm whales. The profit from the sale of this precious ambergris was used to finance the whale hall.

When entering the whale hall, you will immediately see three large skeletons hanging from the ceiling. The skeleton on the left side is an orca. This orca stranded in October 1963 on Texel. It was a 5.5 meter long male that was already dead before the stranding. Visitors can touch a cervical vertebra of an orca that is mounted under the skeleton. Information about orcas can be found around the skeleton. Visitors can for example learn what orcas eat, how they live and what kind of sounds they make. The information is available in Dutch, German and English.

The skeleton in the middle is a humpback whale that washed ashore on the Wadden Island Vlieland in 2004. The skeleton on the right side is of the stranded sperm whale from 2012. Behind these three large skeletons, there are some smaller skeletons of a beaked whale, a harbor porpoise and a white beaked dolphin on display.

A lot more information about whales is provided on the walls around the skeletons. Visitors can see on a screen where and when cetaceans, including orcas, stranded on the Dutch coast. On the other side of the hall, visitors can compare the skeletons of humans and dolphins. The evolution of cetaceans can be found on the back wall. Replicas of the early ancestors are visible on the left side. Toward the middle, the split between toothed whales and baleen whale can be seen. Further towards the right side, all types of cetaceans are displayed per group, where the orca is of course placed in the dolphin family.