Orcas off Newfoundland and Labrador 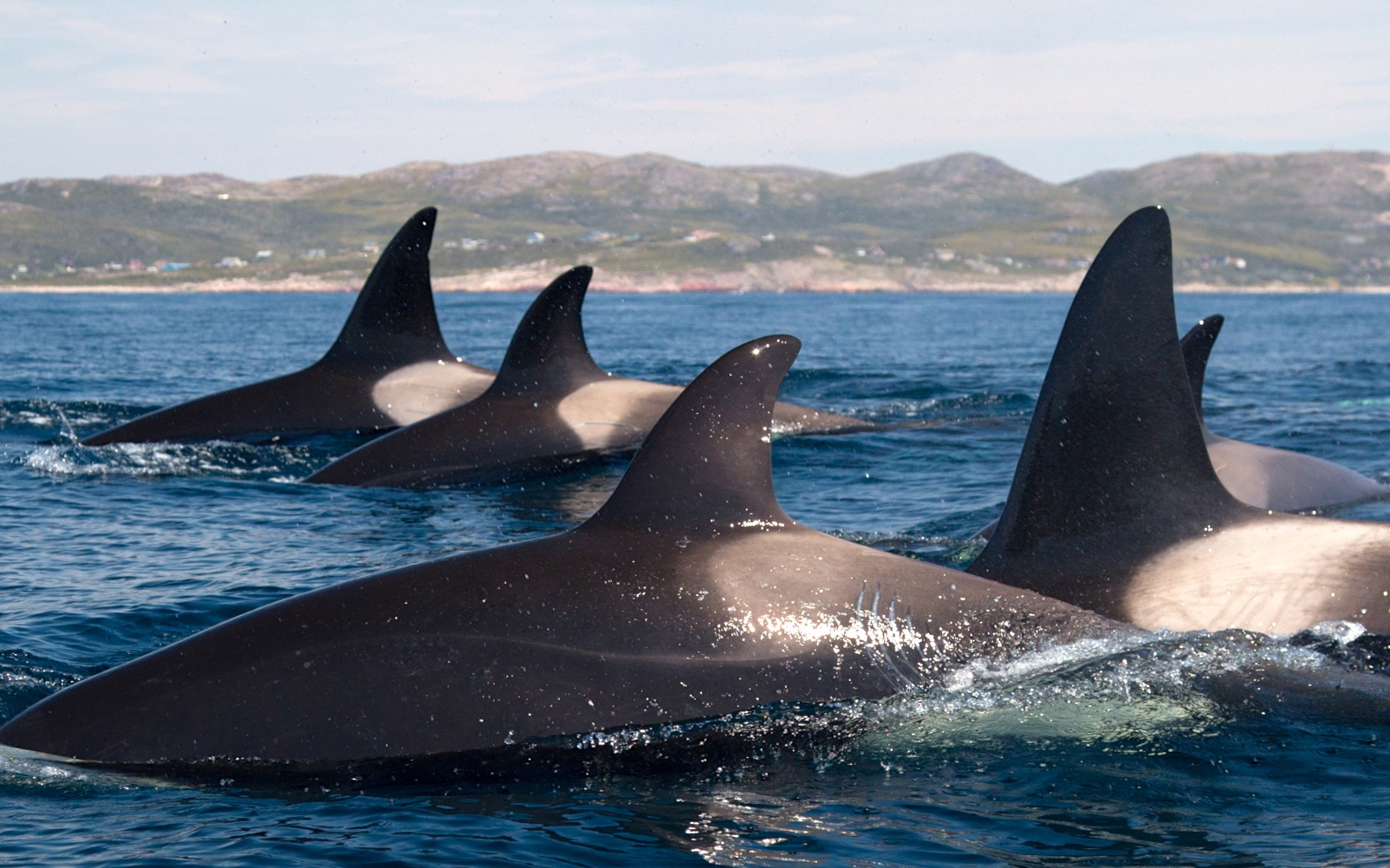 Everyone has heard of the orcas that live off the North American west coast. The east coast is also regularly visited by orcas, only much less is known about them. High time to get to know this population.

While very little was known about orcas in Newfoundland and Labrador until studies began in earnest in 2002, orcas were common enough to serve as a prominent subject for the art and rituals of the people who lived there three thousand years ago. The art and carvings on display at the Port aux Choix National Historic Site are a testament to this. 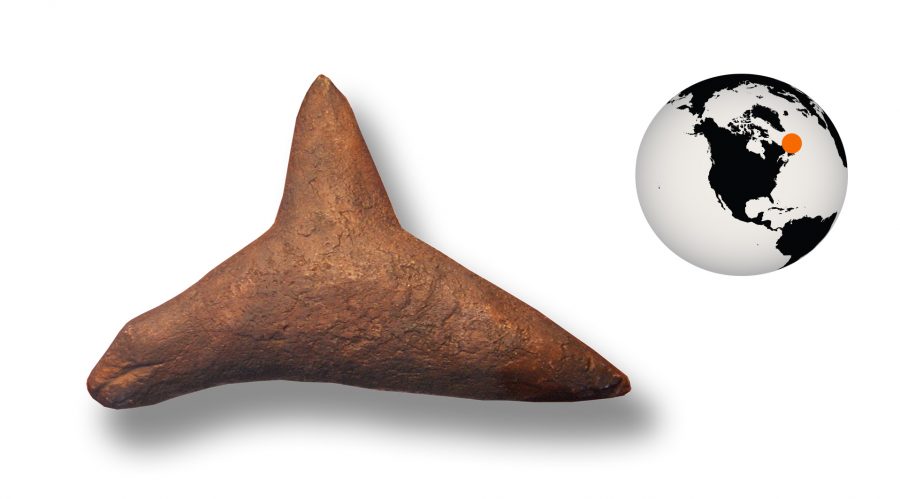 Start of the study
During the late 1990’s local fishermen off southern Labrador were encountering more and more orcas, often in large numbers. From their observations, the whales appeared to be feeding on herring, capelin, salmon and mackerel. Subsequent years of study would expand this knowledge as large groups of orcas were observed feeding on dolphins, with increasing evidence of attacks on minke whales and humpbacks. David Snow, whale biologist and owner of Wildland Tours, St. John’s, was the recipient of numerous reports of orca sightings. Dave then began a more systematic study of the areas and numbers. Locals at Battle Harbour, an Island community and National Historic Site off the south coast of Labrador were reporting frequent sightings. Biologist Paul Alcock of Northland Discovery Boat Tours, St. Anthony, was reporting frequent sightings and visits to the area each summer through the late 1990’s, 2000, and more recently. Over the years Paul and naturalist Steve Sheppard have contributed numerous photos to a growing database.

Encounters
I first met Dave Snow when I travelled to Newfoundland to participate in a Whale Study Week in 1999. Our focus then was to document and photograph humpback whale tails for the catalogue housed at Allied Whale, Bar Harbour, Maine. During my time with Dave, our conversation often turned to other whale species in Newfoundland waters, including orcas. This was the first time I became aware of a western North Atlantic population. Dave indicated he was planning a Southern Labrador Adventure to Battle Harbour, Labrador in August 2002 in the hopes of seeing orcas. Being keenly interested in orcas, I asked to join the group. We didn’t encounter orcas on that excursion, but after further discussion with the locals, Dave decided early September might be a better time to visit. While we were unsuccessful in 2002, there were reports of orca sightings off Twillingate, St. Anthony, St. John’s and from the ferry that travels between St. Barbe, Newfoundland, and Blanc Sablon, Labrador.

Our small group returned to Battle Harbour in September 2004, and on our first day on the water, we encountered a family of five orcas – a large male, 2 females, and 2 juveniles. 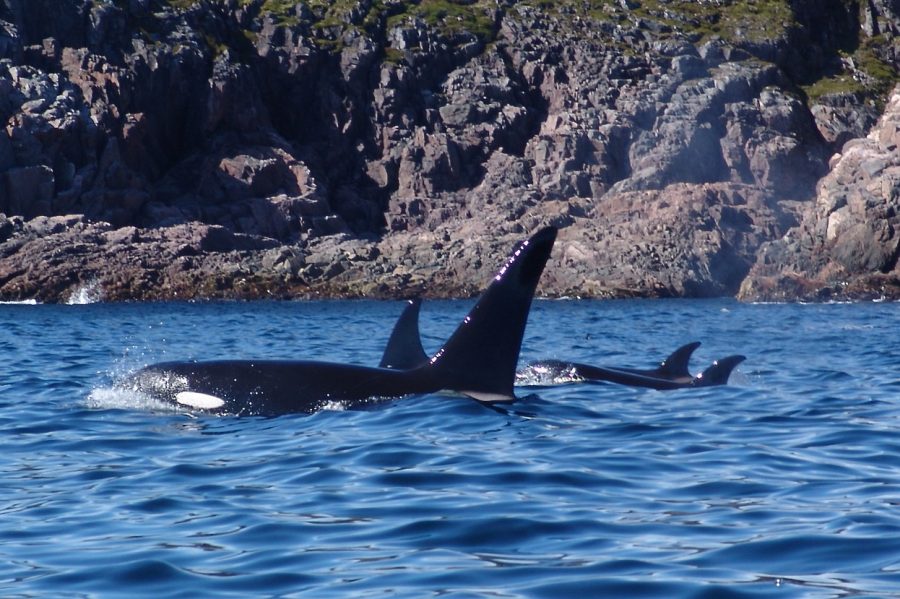 I returned to the area with Dave and study groups in September 2005, 2006, 2007, 2008 and 2009 and on my own in August 2007, 2008 and 2009. A 2005 group included 7 whales – females, juveniles and a calf. This group tormented 3 humpbacks by swimming in close proximity and vocalizing for perhaps 10 minutes. The humpbacks responded with loud trumpeting sounds. For whatever reasons only known to the orcas, they did not proceed with an attack. Dave Snow recorded the vocalizations of the orcas, the first-time ever recording of members of this northern population. By 2008-2009, curiosity about orcas around Newfoundland had grown significantly with more and more reports of sightings from local fishermen, private individuals and a growing industry of tour boat operators. We learned that Trinity Bay and Bonavista Bay were hotspots for orcas. Tour boat operator Kris Prince of Sea of Whales Adventures and his friend Reg Kempen were developing a catalogue and website of the orcas that visited the area. The first photos were taken in 2007 and they have continued to document and photograph visiting groups to the present day. Kris, Reg and other people in the Trinity and Bonavista areas have since shared their photos to add to an expanding North Atlantic Orca catalogue.

“By 2008-2009, curiosity about orcas around Newfoundland had grown significantly with more and more reports of sightings from local fishermen, private individuals and a growing industry of tour boat operators.” 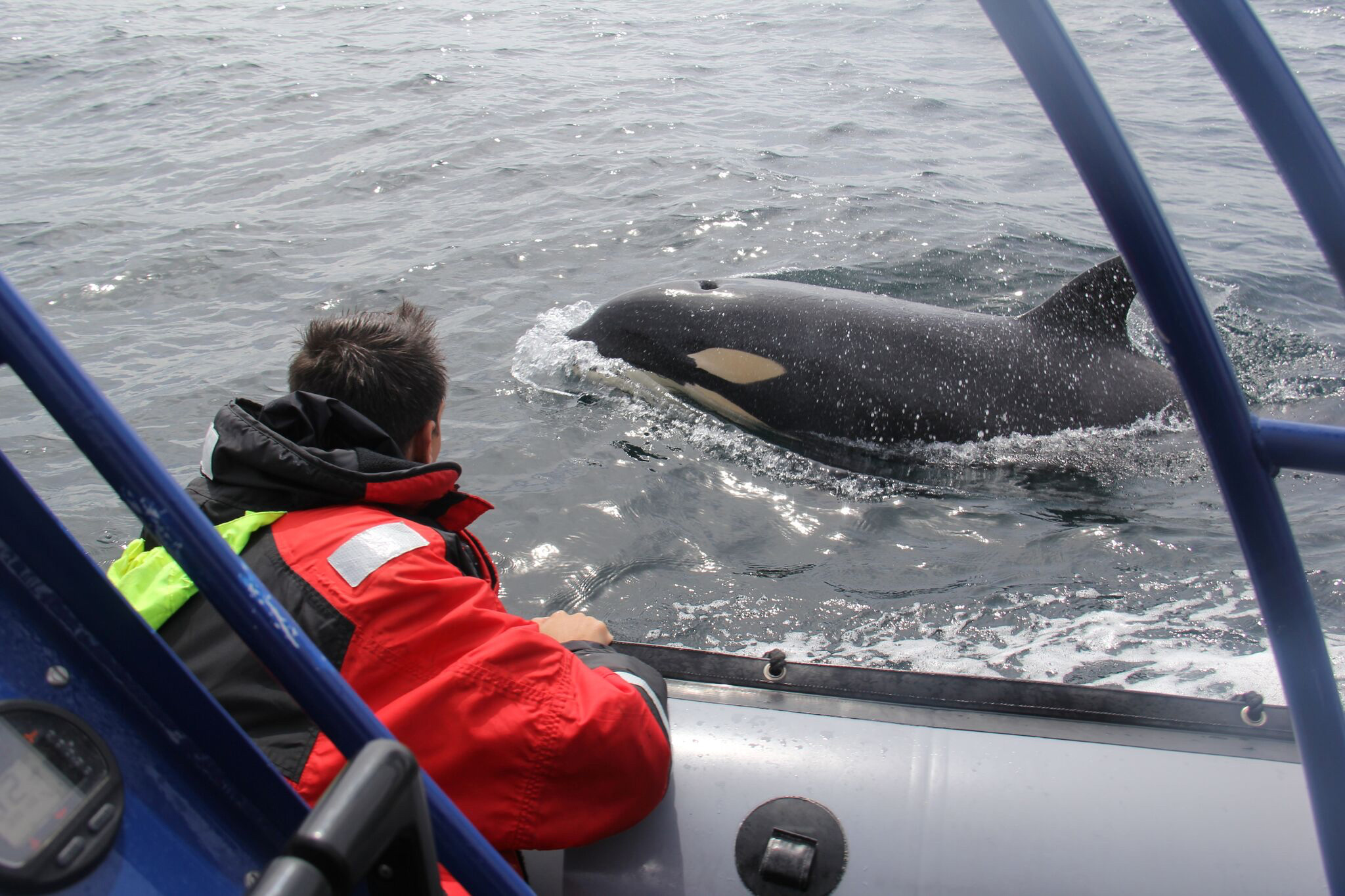 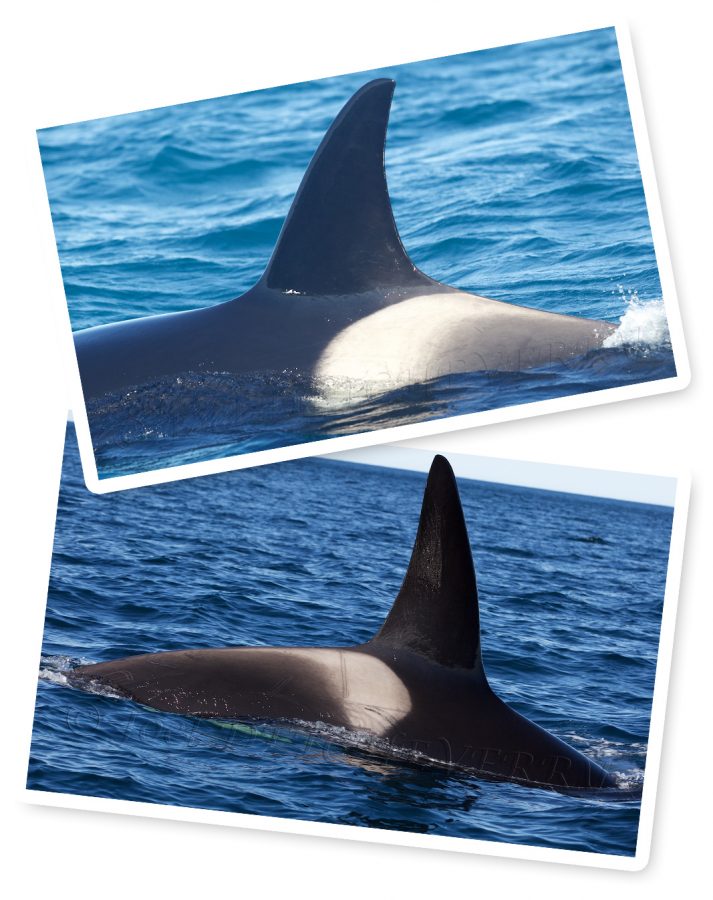 During this time we were also learning about frequent sightings off Saint-Pierre et Miquelon dating back to 2007. I connected with Joel Detcheverry in 2013 to inform him of our orca studies. Joel sent me sighting information and hundreds of photos he had taken. I began developing a Saint-Pierre et Miquelon Orca catalogue which he continues to add to. Joel has sightings of known whales most summers and many new whales. Joel has made several recordings of the orcas he has encountered. We have lengthy sighting histories for several orcas in this population, with one pair as examples. The female was first sighted in 2004 off Battle Harbour, Labrador. She has a white pigmentation at the base of her dorsal fin, so we named her Butterfly Girl. The male was first sighted off Saint-Pierre in 2010. This pair have been frequently sighted together off Saint-Pierre, most recently in September 2019, and were together off Twillingate in 2013 and Trinity in 2018.

Citizen science
From the accumulation of data and photographs over a period of 20 years, we were and are learning more and more about the western North Atlantic population. During this time I made personal contact through emails, phone calls, and visits to the people and tour boat operators who were having the most success. These people in turn continued to contribute hundreds of photos to Dave Snow and myself. This expanding collection helped me make the decision in 2014 to create a Newfoundland and Labrador Orca catalogue. Incidentally, I am not a biologist but referred to as a “citizen scientist”. Living in land-locked Ontario, I eagerly look forward to returning to the east coast each summer to spend time with whales, whatever the species.

Some things we were learning
These orcas followed a transient lifestyle, travelling the coast from Southern Labrador along the Northeast coast of Newfoundland to the south coast and to Saint-Pierre et Miquelon. One of orcas even made a brief visit to Matane, Quebec, after leaving Burgeo, Newfoundland. Many groups of orcas had no on-going family relationships from sighting to sighting and year to year. We were seeing and continue to see 2 or 3 individuals in a group one year and with a totally different group the next year. An exception to this is a large male with a backswept dorsal fin (the D-Male) that is always accompanied by a female with a noticeable dorsal notch, possibly his mother. This pair was first sighted off southern Labrador in the late 1990’s with the most recent sighting off Trinity in 2014. 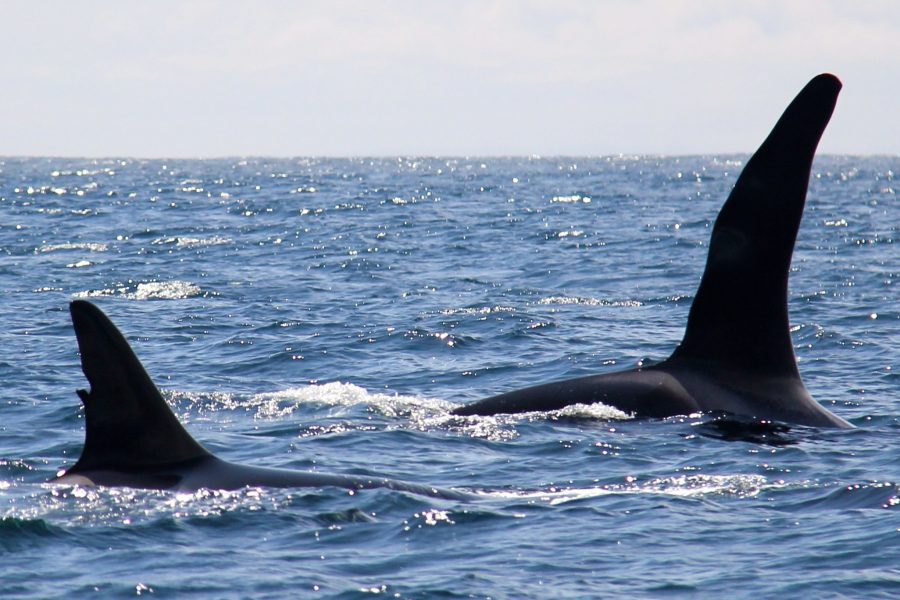 Living in ‘loose associations’
Dave Snow contacted John Ford, long-time orca researcher in British Columbia who suggested we call these groups “loose associations” since they don’t stay together in pods, unlike BCs residents and transients. From our readings about the orca populations of Iceland and Norway, it seems their research observations have determined that the eastern North Atlantic groups form similar “loose associations”. In terms of dietary preferences, we are inclined to call these orcas “generalists”, since their diet includes fish, seabirds, seals, dolphins, minke whales, with a few witnessed attacks on humpbacks. The summer of 2010 was noteworthy for several minke whale kills. A large group of orcas including the D-male and his female companion, and several other whales we had come to know from our studies, attacked and killed a minke whale in Tors Cove, south of St. John’s. Dave Snow was on one of the boats and observed this kill. Some of these same orcas have participated in minke kills off Cape Spear, Torbay, Trinity and Twillingate. Joel Detcheverry has also witnessed orca attacks on minke whales off Saint-Pierre et Miquelon.

The work goes on
David Snow died very unexpectedly in April 2017, however, our study group continues to update the Orca Catalogue. As of 2020, there are 152 identified orcas in the Newfoundland and Labrador Catalogue. This is not an accurate reflection of the population size, since I have dozens of photos that are not ID quality. There are 96 identified orcas in the Saint-Pierre et Miquelon catalogue, and again we have many photos that are not ID quality. Of the 96 whales in the Saint-Pierre Catalogue, there are 14 whales common to both catalogues. Many of the Saint-Pierre orcas have been observed in locations such as St. Anthony, Trinity and Twillingate and vice versa. Almost every year large groups appear and maintain their distance from boats. Some of these groups have numbered 30-50 whales. Aerial surveys have observed groups of up to 100 orcas in areas such as Grand Bank. Since this is an area known for an abundance of different fish species, the orcas may be gathering to enjoy a plentiful buffet. One of the positives we have noted is that every year there are new calves in the groups, some with females we have previously ID. We are taking this as a sign that this is a healthy population. The orcas have very little boat traffic to deal with, and the waters of Newfoundland and Labrador are relatively pristine and free from contaminants. 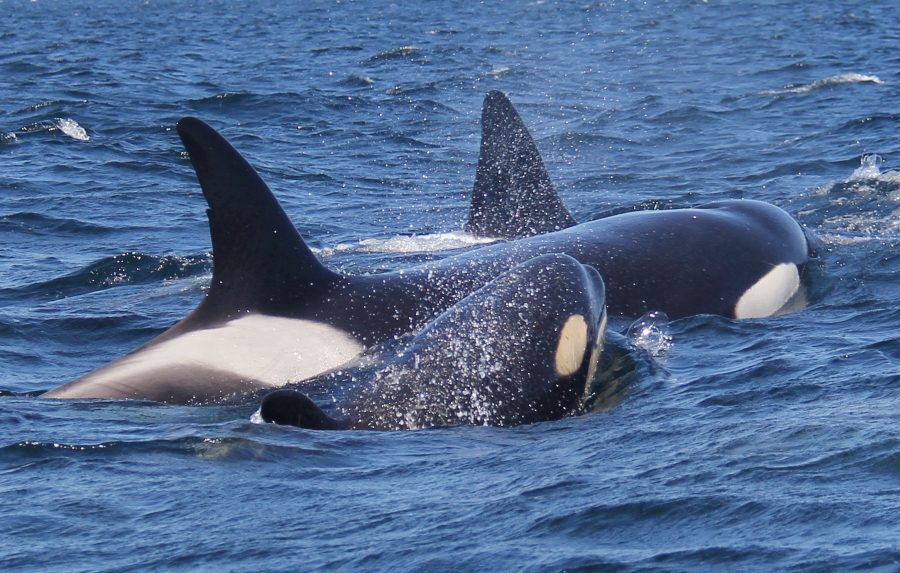 “Unfortunately there is no one else actively studying and photographing the western North Atlantic population at the present time.”

I wish to give special credit to David Snow for pioneering orca studies in Newfoundland and Labrador, Kris and Shawna Prince and Reg Kempen of Sea of Whales Adventures in Trinity, Joel Detcheverry in Saint-Pierre et Miquelon and Paul Alcock of Northland Discovery Boat Tours in St. Anthony. There are many other contributors to our catalogues, too numerous to mention. We have connected with a group of scientists in Manitoba, Canada, that is developing an Arctic Orca Catalogue. We look forward to comparing the orcas in our respective catalogues, and are reasonably certain we will have some matches, since these whales have a very large range. Unfortunately there is no one else actively studying and photographing the western North Atlantic population at the present time. It is our hope that as this population becomes better known research groups might be interested in visiting Newfoundland and Labrador. We would certainly be willing to share our knowledge and assist with future studies of these special animals. 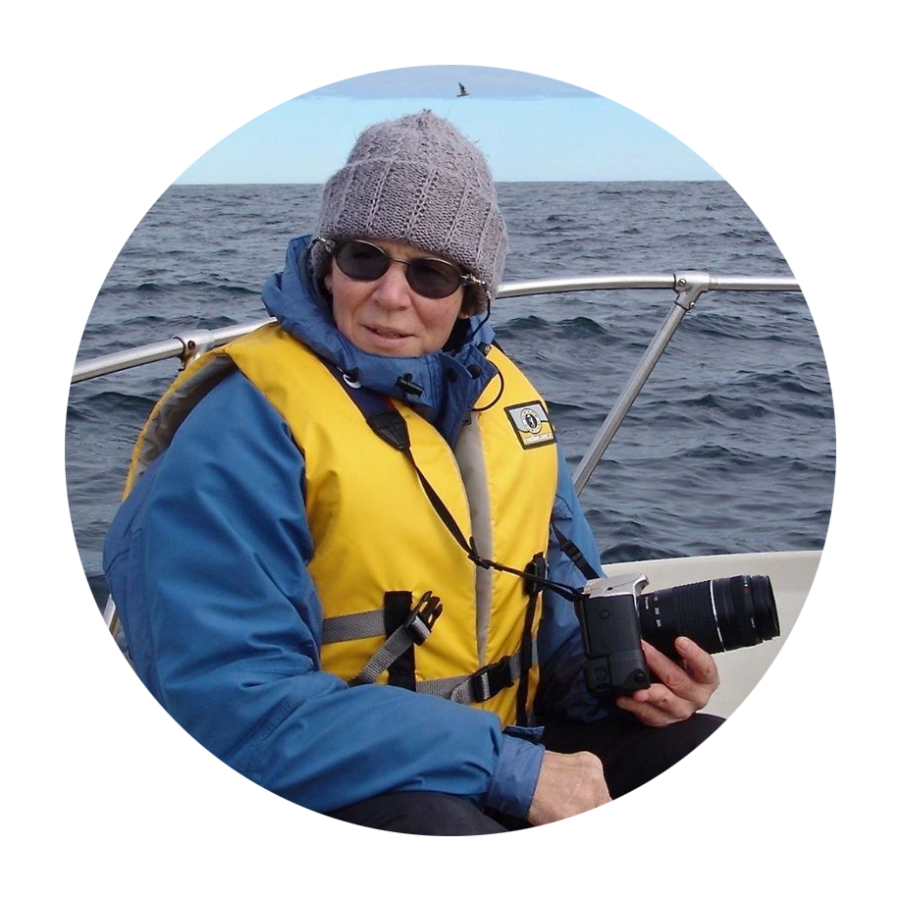 Arlene Erven is a whale enthusiast living in Ontario, Canada. She has spent approximately 20 years as a citizen scientist and volunteer studying and photographing humpback and orca populations in the waters around Newfoundland and Labrador. For Arlene, any day on the water with whales is a good day! Some of her photos can be viewed on Flickr (Arlene is echo8 on Flickr).